These buildings are included on this website as real examples of what was bought, and sold, in the late 1990′s and early 2000′s when we first started the hotel-room-ownership idea. We have included this section to assist readers and prospective members to see that the narrative on this website has translated into very real projects, with a lot of progress having been made over the years. To give comfort to readers that this  hotel-room-ownership idea has firm foundations and is earnest in it’s endeavour. Albeit the physical structures of these hotels are no longer owned by us, they have yielded great experiences, and sufficient resources to enable the most fortunate ancillary benefit of creating over 100 jobs. 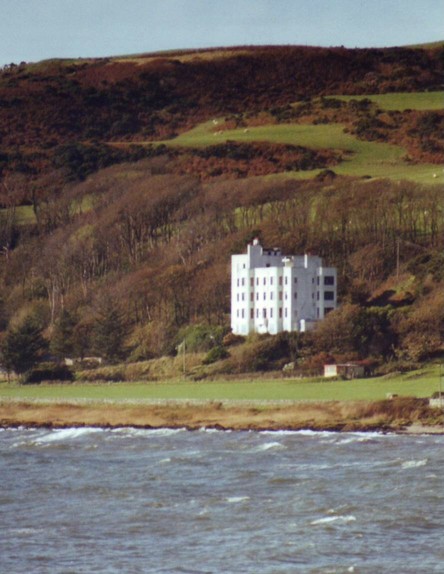 The first hotel our group of friends bought was the old Keil Hotel on the Mull of Kintyre. The year of purchase was 1999. The Keil Hotel turned out to be an incredible bargain. Though the building was near derelict, it was not listed, so we had the comfort that if all went pear-shaped the land upon which the building sat, with the incredible Sir Paul McCartney iconic sea view, was worth between £75,000 and £100,000.

The condition of the building meant it was unmortgageable. Not that any of us wanted a mortgage. In fact being mortgage free has been a happy theme ever since 1999.

The price on the old Keil Hotel was negotiated down to £24,000 feuhold – the best quality of title in Scotland and equivalent to the more well known UK freehold type of ownership.

The writer of this page bought a £12,000 chunk and two syndicate friends went £6,000 each. It was an incredibly interesting experience. Though fairly short lived as we received a very good offer – comfortably over the land value top estimate. All three of us took the decision that there were plenty more hotels to buy, and hotel rooms to own as individuals. So we sold up. The whole hotel went for just over £100,000. We started looking for another hotel to buy. With a very unexpected but welcome £76,000+ profit between the three of us from our sale of the old Keil Hotel this was a good position to be in. Though we did hope the next hotel would have a roof that still worked! 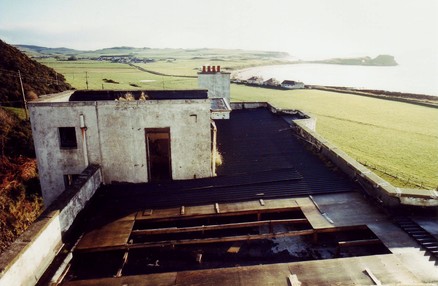 It can be seen from the photograph of the Keil Hotel roof, that efforts to repair it, and in fact replace it with a more robust structure had been undertaken. But following bank repossession several years earlier, the property had become insecure, then vandalised, and was pretty much a shell by 1999. The masonry was sound, so there was something to build with. Indeed after we sold it, the eventual owners have replaced the roof and fitted new double glazed windows to keep out the draft from the North Channel off the Mull of Kintyre. They are now working on the interior. We wish them well and every success when they come to reopen this impressively located hotel in the near future. 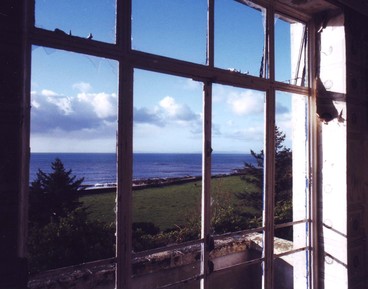 The final photo of the old Keil, shows through the old metal framed windows, what was one of the greatest attributes. The fabulous seaviews. Slightly out of shot, but to the left is Sanda Island, then Ailsa Craig Island. More centrally on a clear day, a view across to Northern Ireland, with, to the right of the panoramic vista, and in frame, the marvellous waters by the Mull of Kintyre.

This first hotel building, bought by our embryonic small group certainly whetted the appetite. It wasn’t long before another old closed hotel was found to buy. 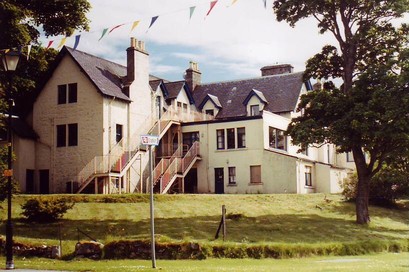 The second hotel our group of friends bought was away from Argyll and to the old Sutherland Arms Hotel in Lairg. A substantial 34 bedroom building that had closed in the late 1990′s. Our group bought it in 2000.

Formerly the Duke of Sutherland’s Hunting Lodge, the building had been converted to a hotel and extended over many years. The grounds it sat upon were extensive, and there was a beautiful view over Loch Shin. Sadly, the hotel closed around 1997. It had deteriorated quite badly whilst unoccupied. After we bought it, a very good offer to buy the property from us came via a gentleman who runs a travel company in Ireland. He seemed like the ideal buyer, with all the right connections to reinvigorate tourism to this large hotel. After a discussion between our hotel-room-ownership group, we decided to sell for a welcome surplus, and seek out another closed hotel for our endeavour.

So after an all too brief ownership of this fine hotel, we moved our attention to locating an alternate closed hotel to reopen. 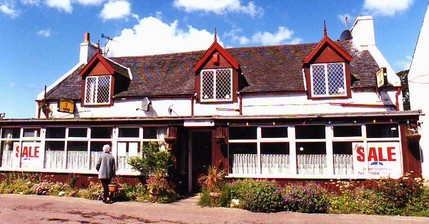 The third hotel that our group of friends bought was the Ferry Inn at Kintyre. Following the financial success of the first and second hotel purchase and sales, our hotel-room-ownership numbers had increased. The old and closed Ferry Inn building caused problems as a result. Whilst we purchased what was a bargain off of the administrative receiver, there were only three bedrooms. Events overtook us, and with 17 folk wanting to buy bedrooms at that time, we had to find something that could cope with the increased number of rooms required. 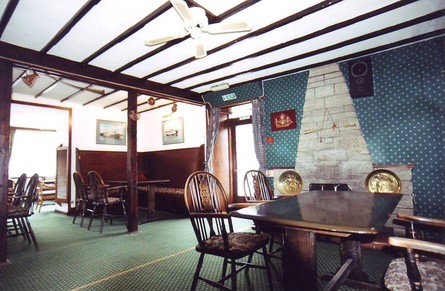 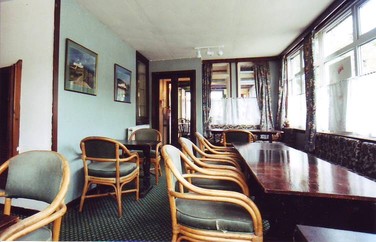 In need of a larger hotel, we sold the Ferry Inn and were lucky enough to find something splendid. To progress our hotel-room-ownership idea we bought a bigger, better, beautiful bargain with amazing views, and in very good condition. 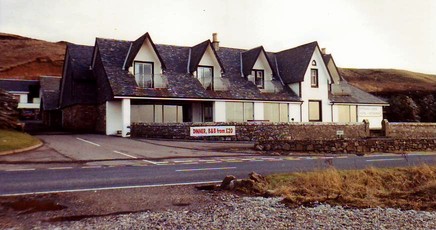 The fourth hotel our group of friends bought was the Duke Of Argyll’s former Hunting Lodge, now a 14 bedroom hotel, with sufficient accommodation to allow all those in our group to take part in a hotel-room-ownership project. 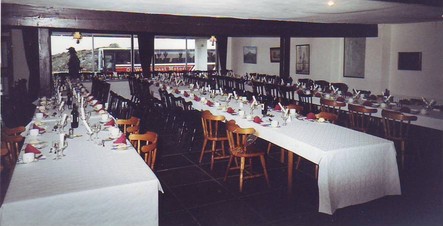 At last, we had bought a hotel that hadn’t been closed for too long, and was on the cusp of being fit and in reasonable condition to re-open.

The location was brilliant. On an arterial road. Lots of passing business. The main reason for closure had been an overstretched bank mortgage. Our own business model then and now is to have NO mortgage or bank burden. This hands any business a substantial liferaft if things get tight. 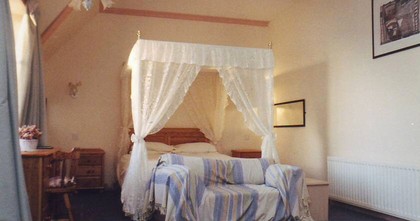 The thought of bringing this decent sized, wonderfully located hotel back to life was enthralling. Much excitement rippled through our group of hotel-room-owners. Not least, but the prospect of an unlimited supply of holidays. Plus when not in residence at the hotel, there was that tantalising source of rental income from room renting guests.

Here’s the thing. Soon after we bought the Hunting Lodge Hotel in Argyll, the securtiy shuttering came off, a deep clean commenced and the repairs needed were started. Local interest was aroused. Even distant curiosity. So it was that along came a chap in a kilt and made what can be described as the almost routine offer that cannot be refused. Some of our group were not wanting to sell. Just look at the sea view and the setting. It is understandable that some of us wanted to hang onto this hotel. But the vote was in the majority. Sell the building for the excellent offer. There would always be more closed hotels to buy.

So we sold this one too. Though by now, there were other different, non hotel based projects calling. So we put the hotel-room-ownership idea on the back burner for a while.

[Please Click On Either Blue Weblink Above For More Detail]

Now that the Closed Shop Reopening Initiative has been established, and the Unique Property Bulletin online and doing well, we are returning to our Hotel-Room-Ownership project, albeit a few years further down the line, to see if the theory can be put into practice. Our next hotel WILL BE A KEEPER and not be sold. Though individual room owners are of course at liberty to sell their rooms if, and as they might wish. In fact, one of our number is looking to buy two rooms at the initial price offering, and then sell one on for a modest profit. His theory is that he should end up with the remaining hotel room at a very decent net price with the surplus from the first bedroom resale helping towards that goal. We can but see. He reckons the proven surplus from the earlier hotel buildings bought and sold can be replicated on a smaller room by room basis.